Flaherty's Legacy:
The Good, The Bad & The Ugly

The unexpected, shocking death of Jim Flaherty, the Conservative Party of Canada’s only finance minister until his retirement less than a month ago, has resulted in hundreds of tributes for his commitment to public life and praise from those in business and conservative circles who approved of his financial and economic policies.

Flaherty, who was only 64, was devoted to his family and one of the most popular Members of Parliament. And while his life achievements and humanity should be praised, it also needs to be said that during his time in the federal government his policies severely discriminated against the vast majority of Canadians.

Flaherty had control of Canada’s purse strings during a period that led to a situation where, by 2012, the 86 wealthiest residents held the same amount of wealth as the bottom 11.4 million Canadians combined. Lagging wages have led many Canadians to take on record-high debt as they try to keep up with increasing costs. 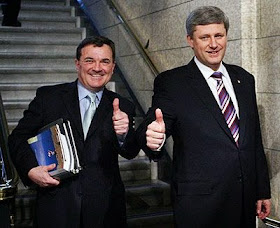 In fairness, it’s impossible to assess Flaherty’s legacy as finance minister without factoring in that Prime Minister Stephen Harper kept him on a short leash. Harper, a rabid neoliberal, no doubt put forward a number of the Conservatives’ most anti-social policies. The two argued, but it’s safe to say that Flaherty lost more battles than he won.

With apologies to Clint Eastwood, the Flaherty/Harper contributions to the economic life of the country can be broken into three main areas: The Good, The Bad, and The Ugly.

While he personally didn’t approve of the measure, Flaherty’s early 2009 budget opened Ottawa’s coffers with a $40-billion stimulus package to prop up Canada’s economy. Writers Scott Clark and Peter DeVries point out that, a year earlier, Flaherty made the biggest mistake ever made by a finance minister in denying that Canada was going into a recession.

After implementing policies that led to a slight housing market bubble, Flaherty took measures to rein in rapidly increasing prices. He publicly took on banks that were exercising irresponsible lending practices and made it harder for low-income people to take on mortgages.

Flaherty was also instrumental in the introduction of the Registered Disability Savings Plan, which helps Canadians with disabilities and their families save for the future. Reporters point out that Flaherty was emotional during a 2011 announcement of a government review of the program. His son John suffers a learning disability and has participated in the Special Olympics.

To his credit, during his last days in office, Flaherty publicly opposed a Conservative election promise -- income splitting. Strongly promoted by Harper, this would allow one spouse to transfer part of their income to a lower-earning partner, greatly benefiting the wealthy.

Families that need adequate housing may be left out in the cold if the Conservatives’ funding pattern continues the way it’s going. As NDP MP Mike Sullivan said in the House of Commons, the contribution to affordable housing was $3.6 billion in 2010. It has fallen to $2 billion, and will fall further to $1.8 billion by 2016. This amounts to a 52 per cent cut reduction over six years, when there’s more need than ever for affordable housing.

In 2013, Flaherty/Harper were responsible for implementing changes to employment insurance benefits program that have made the lives of many Canadians more difficult. Recipients face tougher rules, such as having to drive several miles to take what is likely to be a low-paying job if there are no jobs in their own community. In 1996, the maximum weekly benefit was $604, while today’s average benefit is just $335 per week.

The Flaherty/Harper highly-publicized plan to have a balanced budget by 2015 is an exercise in manipulation and, frankly, dishonesty. The Conservatives could be swimming in money now, and could have had a balanced budget earlier, if they had acted differently. They cut the Goods and Services Tax twice, removing a staggering $14 billion annually from government revenues. They lowered corporate income taxes, losing an average of $6 billion in annual revenue, and continue to cut income taxes, costing $3 billion more.

Not to mention that in 2013, someone in the government lost $3.1 billion from the anti-terror funding program. It disappeared into thin air.

Deep austerity that has amounted to an assault on the poor is at the centre of Flaherty/Harper economic policies. The austerity program translates into less income, decreased services, and reduced health care for many of Canada's most vulnerable people. It appears that more than 3.5 million Canadians are currently struggling.

Flaherty/Harper removed billions of dollars from the government’s kitty that could have been used to pay for much-needed programs. Instead they gave it to corporations in the form of tax breaks. In the last quarter of 2013, Canada’s corporate cash hoard, or “dead money,” as it was called by former Bank of Canada head Mark Carney, was $626 billion. That’s not a typo: $626 billion! As a result, our total corporate tax rate is significantly lower than any of the other G8 developed countries. With many Canadians in need, there’s no evidence that this lower rate helps attract more businesses.

Unless new taxes are put in place, the federal government under Flaherty will have destroyed the ability of future governments to fund important programs cut by the Conservatives. The two biggest revenue losses are the $14 billion in GST revenues and the corporate tax breaks of $6 billion annually.

Under Flaherty/Harper, the government severely cut funds for health care, removing transfers of some $36 billion to the provinces over 10 years. Now the future of the country’s united health care system is in question.

As so often happens with prominent people when they pass, Jim Flaherty is receiving tremendous praise from colleagues, much of the public and mainstream media. But if we are going to pay tribute to a man who passes, it's important not to examine his legacy uncritically.

The days of highly conservative governments, such as the one Flaherty/Harper have led for eight years, will surely come to an end soon. They will change or face growing opposition in the streets, including civil disobedience and worse. I’ve often said that a 10-year-old, shown the basic economic information that guides neo-liberalism, could tell us the system doesn’t work for the majority of a population.

Reinforcing the assessment of my mythical 10-year-old, a book by French economist, Thomas Piketty, has set modern economic thinking on its head. Capital in the Twenty-First Century  confirms our long-held belief: the inevitable outcome of free market capitalism is worsening inequality.

Setting aside the failure of neo-liberal policies to assist a society, Piketty suggests that even traditional liberal policies on spending, taxation, and regulation will fail to diminish inequality. He says the only way to correct the unfair system is to impose a global progressive tax on wealth. He would impose an annual graduated tax on stocks and bonds, property and other assets.

I can imagine Bay Street and Wall Street, with copies of his books being hurled out windows, hitting the sidewalks.
-30-
If you don't already, please subscribe.